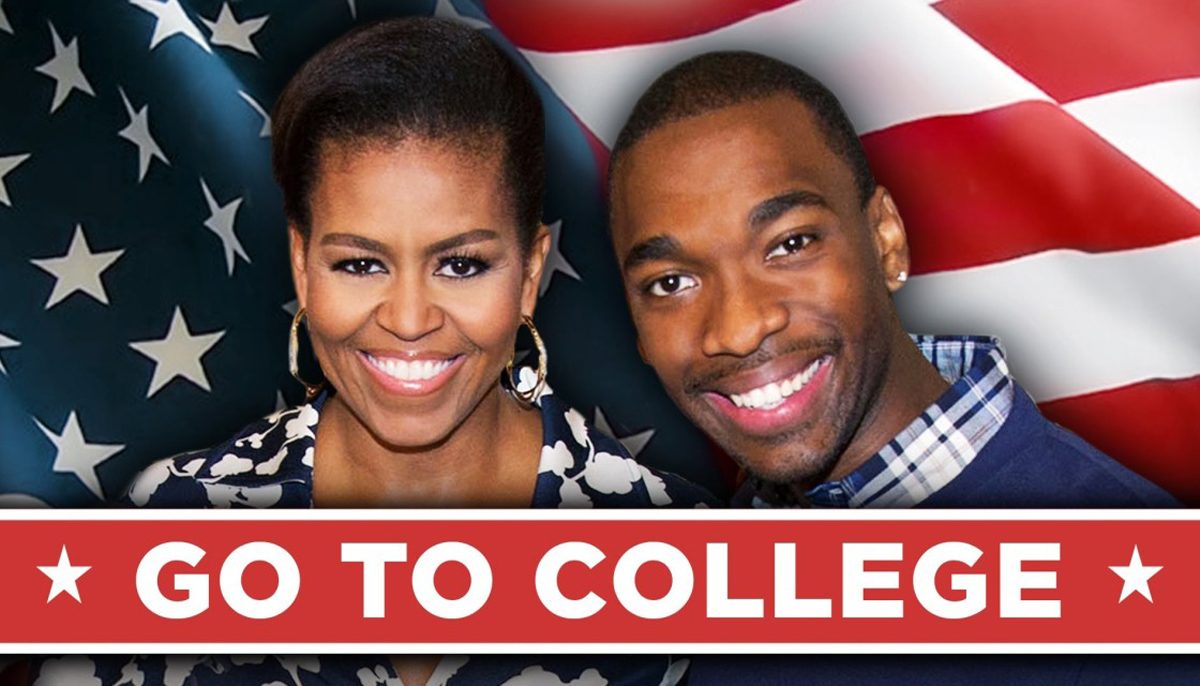 I recently watched your video, Go to College, and it made me wonder, “Why would the First Lady of the United States use her celebrity and influence to promote something that for so many young people around the globe is not option?

What I mean by not being “an option” is: (1) the epidemic of failing educational systems that can be found in many countries around the world including our own, (2) organizations that build schools they would not send their own children to, (3) teachers who stop caring, (4) outdated books and a lack of innovative lesson plans, (5) overcrowding due to closing school…I could go on. Millions of children don’t stand a chance of being college ready when they grow up. Right here, in our own back yard, approximately 40% of high schools students are not college ready in math and english upon graduation. And beside the poor quality of preparation available to the majority of school age kids, we cannot disregard the simple fact that college isn’t for everyone. Just ask Benjamin Franklin, Christopher Columbus, Coco Chanel, Larry Ellison, Richard Branson, Steve Jobs, Rachael Ray…all whom never went to or finished college. See who else didn’t go to college and made it BIG!

This video reminded me of when Bill Clinton told the American people that everyone in the U.S. could and should own a home. We all know how that turned out–dare I say–as a catalyst for the financial crisis.

Having watched your video several times, I’m curious as to who came up with the opening scene. The two young people scream “college bound” to me. I assume that the demographic you are hoping to inspire is a little more diverse than the one represented here. Didn’t anyone think the opening scene was a perfect opportunity to speak to the target demographic by encouraging diversity?

The video inspired me to do more research. And what I found was not only discouraging but downright infuriating. Did you know–because I didn’t!–several schools in California have lowered the average grade needed to graduate from a C to a D? Or that 32 states no longer require high schoolers to take English courses? (Personally, I could have benefitted from grammar and vocabulary courses all the way through college. Where I grew up in New Jersey, grammar stops in the 6th grade.) I became so frustrated the more I read, I had to stop, but you can read more on how “American Schools Are Training Kids for a World that Doesn’t Exist“.

So, back to my original question: Why make a video suggesting students “go to college” when right here at home it’s blatantly obvious that the educational system is failing to prepare our children for the challenge?

You and Jay Pharaoh say the only way to cash the big checks is go to college, but statics show only 14% of college students were able to secure some level of employment upon graduation in 2015–down 3%  from the year before. Making the “big pay day” that you rap about very unlikely for so many.

Also, who came up with the list of careers that are highlighted in the video? Besides mathematics and engineering all the others careers including astronomer, astronaut, archaeologist, are highly coveted positions. According to the U.S. Department of Labor, there are only 50 openings for astronomers per year in this country. Archaeologists fair slightly better with 7,700 jobs in 2014. Meanwhile, the odds of being an astronaut: 13,200,000 to 1. A young person has a better chance of being struck by lightning than securing a paying job in any of these fields. Economist, doctor, or lawyer would have made much for sense. “If you want to watch paint dry or the grass grow don’t go to college.” Really? Did you know that a hard working landscaping contractor can make up to $93K year? Or the person who watches paint dry can make up to $57,726? Heck I paid $1000 to have my one bedroom apartment painted. The guy banged it out in one day. Why not rap about becoming an electrician, mechanic or a plumber? There are endless possibilities.

Corporations, domestic and international, will tell you the hiring pool is pretty empty when it comes to prospective employees. Recent polls stating that “America has near record 5.6 Million Job Openings,” supports my belief that the people “whining” about the shortage of opportunities are crying out in vain. The problem isn’t that there are not enough positions. Our education system failing to produce enough capable and skilled candidates able to fill them–that’s the problem, and it needs to stop.

Failing our children academically is no longer an option. At Shule, we’ve found that a majority of parents, especially in developing nations, support your thinking. But mainly for selfish reasons—bragging rights and the belief that a college diploma will fix their family’s financial problems. We have also discovered that in many countries, especially across Africa where we work, pursuing technical and vocational training (which is not mentioned in your video) is seen as failure. Sadly here at home, it’s met with resistance.

Maybe if there had been a few verses emphasizing the importance of staying in school, working hard and respecting your teachers—or a few lyrics about vocational or technical training or entrepreneurship—I might be rapping along with you. But it’s hard to join in on all the fun when the underlying message insinuates: if you don’t go to college, you’re a loser.

I love the idea of inspiring our young people to aim high, and completely understand the importance of staying on message, but when it comes to guiding our youth, we should rap about the unlimited possibilities one can achieve by learning through college, technical and vocational training, and/or good ol’ hands-on work experience.

With celebrity and influence comes a greater responsibility to make sure the timing and thoughtfulness of one’s message is on point. And unfortunately at this moment, portraying going to college as the only viable option for a successful future is irresponsible.

So FLOTUS, I give you an A for enthusiasm. But I give you a C- for the message and use of your platform.

Disclaimer: To all of the Michelle Obama lovers before commenting please keep in mind this is not a personal attack on Mrs. Obama! This letter is questioning the message of the video.  No personal attacks. Let’s get a conversation going on the real problem–global education.  Thank you!!